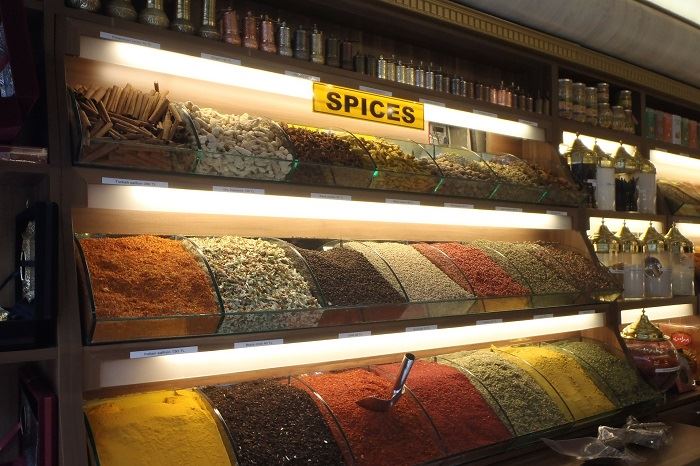 When it comes to so-called bazaars in Istanbul, there’s no doubt that Grand Bazaar is the one that garners most attention from tourists as well as those just interested in the history of the city. However, if you’re looking for something with more color and a bit more vibrancy, you could just find the answer with Spice Bazaar Istanbul.

Located in the Fatih district, the name of the bazaar is something that has undergone change over the years and it still holds different names to different people. For example, historians have found documents suggesting the bazaar started as the ‘New Bazaar’.

Over time, it became affectionately known as the Egyptian Bazaar due to the funding; the market was built in 1660 with revenue from the Ottoman of Egypt.

What about Corn Bazaar? That’s right, it has another name in Corn Bazaar but this is due to a mistake. In Turkish, a single word () means both ‘Egypt’ and ‘maize’ which is why many started calling the complex Corn Bazaar mistakenly (this has since stuck!).

Now, it generally goes by the name of Spice Bazaar in the Western world because this is exactly what you’ll find when you visit…plenty of different spices.

Before we launch into what you can expect today, let’s first discover some of the history of this iconic location. Firstly, the building is within the same complex as the New Mosque and this played an important role in the early years. Why? Because the upkeep of the mosque would be paid for by revenue from the shops inside the bazaar.

If you visit Istanbul, you’re likely to hear about the Great Fire of 1660. Lasting for more than 48 hours, this fire caused devastation for several neighbourhoods…but it also led to much redevelopment across the city.

Not only did the New Mosque undergo construction, but plans for the Spice Bazaar were also approved and commissioned by Sultan Turhan Hatice. As you may discover during your stay in the city, this was the Queen Mother (Valide Sultan) of Sultan Mehmed IV.

For generations, and still today, the Spice Bazaar was the place to go for spices not just in this district but right across the city. However, some traditions are being lost and other stores are starting to replace the spice shops.

In total, there are 85 shops inside Spice Bazaar that sell traditional spices, sweets, Turkish delight, dried fruits, nuts, and other foods. Elsewhere, catering to the tourist market, the bazaar has expanded over the years to include jewellery and souvenirs.

As mentioned previously, one of the things you’re likely to notice immediately is the vibrancy and colours that reach the eyes as soon as you enter the bazaar. The building really is a feast for the eyes, and you’ll also get some brilliant shots with your camera if you choose to visit.

While shopping around and exploring the different vendors, don’t forget to look up and around because the beautiful architecture is also worth your attention.

If you want to buy, you’ll find that some products are marked but they tend to be higher than spice shops elsewhere in the city which means sellers expect you to haggle.

If you don’t feel comfortable touring alone, there are plenty of companies that’ll take you on a guided tour of the city and include Spice Bazaar.

Finally, the complex will be open from 09:00 until 19:00 every single day (except for public and religious holidays). For an experience of colour and history (maybe even taste), Spice Bazaar Istanbul will not disappoint.

Let us plan your Istanbul trip that includes a visit to the Spice Bazaar. Visit Istanbul with Classic Turkey Tours.