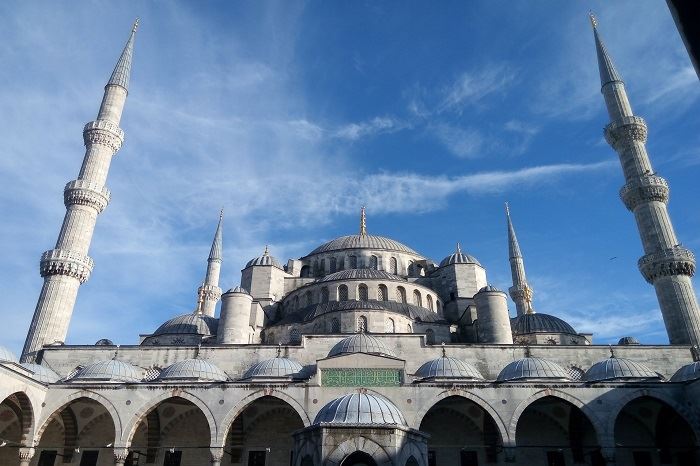 As part of the Historical Areas of Istanbul which is now collectively a UNESCO World Heritage Site, the Blue Mosque Istanbul was first completed in 1616 and remains just as functional today as it was back then. Despite over 400 years of operation, the call to prayer sounds across the city and many people rush to the Sultan Ahmed Mosque, as it’s also known, to kneel on the red carpet. With hand-painted blue tiles and no fewer than five domes, the Blue Mosque has long-been a tourist site and seemingly nothing will ever change this fact.

Between 1603 and 1618, there was a large war with Persia and it led to uncertainty across Istanbul and the wider country. In an attempt to re-establish Ottoman power, the sultan at the time, Ahmed I, chose to build a huge mosque. Compared to previous victors, there were no spoils from the war to fund the mosque so it was paid for with Treasury funds and it became an imperial mosque; the first of its kind for over four decades.

If you’re to visit the Blue Mosque today, you’ll see the blue lights that have been installed around each of the five domes (it’s an impressive sight after the sun goes down!). However, electricity wasn’t around in the early 17th century so how did the mosque acquire its name? Well, there are two tales on this and the more common is that it simply boasts Blue Iznik tiles on the walls inside.

In terms of architecture, there are thought to be well over 20,000 tiles on the walls inside the mosque. Additionally, there are only four mosques across Turkey that can boast six Minarets (tall, thin towers) and the Blue Mosque Istanbul is one of these. Again, we can bring some romanticism into the story here because the words for ‘gold’ and six’ were similar back in the 1600s. If folklore is to be believed, the architect built six minarets when the sultan actually requested gold minarets.

Although the mosque still has religious importance to society in Istanbul, they also recognize the historical importance of the building and therefore allow tourists for much of the day. During the five daily prayers, the mosque will close to all non-worshippers for around 30 minutes so all visitors need to be wary of this (prayer times can be found here). If you have enough time to plan your visit, we also recommend approaching the west side of the mosque, from the Hippodrome, since this will offer the best picture opportunities (we all want the best Facebook profile picture, right!).

The mosque is free to enter, and you’ll need to abide by some rules to stay respectful of the locals and traditions. For example, you’ll be provided with a plastic bag for your shoes as you enter. Also, women must wear a head covering (these are provided for free), flash photography is prohibited, and you should also remain quiet.

The Blue Mosque Istanbul has staggering architecture and the decoration inside is likely to take your breath away. Even if you manage just a short visit, it’s well worth your time for the insight you get into the local culture, religion, and overall life in Istanbul.

Let us plan your Istanbul trip that includes a visit to the Blue Mosque. Visit Istanbul with Classic Turkey Tours.