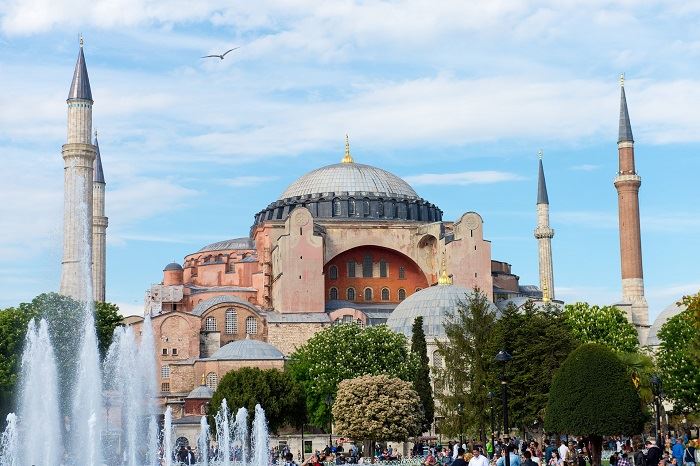 Across Istanbul, the city is filled with beautiful landscapes, stunning architecture, and a fantastic culture. All three of these combine for Hagia Sophia which was first opened as a Byzantine Christian Cathedral. Over the years, it has been through many changes but was eventually transformed into a museum in 1935. What stories does the museum tell? What can you do at Hagia Sophia Museum today? And is it worth your time while visiting Istanbul?

Opened in the historic Constantinople (now Istanbul), this particular cathedral was completed in 537 CE which places it towards the early stages of the Middle Ages. At the time of erection, the huge dome in the centre contributed to a site that was considered ahead of its time in terms of engineering. Thanks to the work of many historians, we know that the cathedral was also likely the largest building in its time.

Despite being built nearly 1,500 years ago, a combination of ceramic pieces and sand was used for the mortar joints – a combination modern-day builders would recognize as comparable to concrete.

Thanks to the name, you can probably guess that the Hagia Sophia Museum is, in fact, a museum. But what transformations has it gone through while the society around the building has changed? Below, we’ve broken down its changing function;

In the grand scheme of things, the Hagia Sophia building has only been a museum for a small percentage of its life; 84 years out of over 1,480.

Life As A Museum

It was Mustafa Kemal Ataturk, the very first president of Turkey who decided to transform the old building into a museum. Over the years, many structural issues have been encountered, including leaking water and a cracked copper roof, but the museum is still going strong for visitors today.

Compared to the original, the Hagia Sophia Museum is in its third construction which means the architecture has been altered. However, it remains a wonder of the landscape and allows visitors every day (except Monday). While opening times are 09:00 to 17:00 in the winter, this extends to 19:00 in the summer.

What items does Hagia Sophia Museum hold? Currently, it’s a celebration of the religion and history of the city. As well as ‘Icons and Church Objects’, visitors will see ‘Tomb Objects’ and ‘Stone Objects’; the latter relates to the architecture and stone creations that surround the grounds.

Throughout the calendar, the museum welcomes plenty of exhibitions and conferences too. Once again, these tend to celebrate the history of the building, art and artefacts relating to Turkey, Istanbul, and Constantinople, as well as the general culture of the city (and how it has shifted through the centuries). Thanks to these, and the general appeal of the museum, 3.4 million people visited the building in 2015 alone. In recent years, this has dropped slightly but it still has the appeal for both locals and tourists.

For museums, the exhibitions and artefacts are important. However, the Hagia Sophia Museum boasts powerful architecture to keep the eyes moving from one magnificent sight to the next. As well as the huge dome in the center, the decor is remarkable and visitors will see features such as the Marble Door, the Emperor Door, the Nice Door, mosaics, the Wishing Column, and plenty more besides!

Let us plan your Istanbul trip that includes a visit to Sophia Museum. Visit Istanbul with Classic Turkey Tours.

Choose From These Exciting Istanbul Tours